This paper develops for the first time the National Transfers Accounts for Colombia. It estimates the age profiles for all income and expenses in the economy flowing from the government to households and vice versa, as well as flows within and across households. The methodology allows us to describe each age group’s production and consumption levels, their savings capacity, and how the different age groups support each other. This document shows that the lifecycle deficit is influenced by low-income which is driven in large part by the prevalence of informality. This hinders the much-needed increase in savings required to exploit the demographic dividend. It also concludes that most public transfers are devoted to the eldest rather than the youngest, but still the former rely on family support rather than public transfers. In this sense, the paper sheds light on upcoming policy debates necessary to guarantee sustainability and self-sufficiency in an aging economy.

Longer lives and fertility far below the replacement level of 2.1 births per woman are leading to rapid population aging in many countries. Many observers are concerned that aging will adversely affect public finances and standards of living. Analysis of newly available National Transfer Accounts data for 40 countries shows that fertility well above replacement would typically be most beneficial for government budgets. However, fertility near replacement would be most beneficial for standards of living when the analysis includes the effects of age structure on families as well as governments. And fertility below replacement would maximize per capita consumption when the cost of providing capital for a growing labor force is taken into account. Although low fertility will indeed challenge government programs and very low fertility undermines living standards, we find that moderately low fertility and population decline favor the broader material standard of living.

In this paper, we document the economic implications of changing demographic conditions in Africa. To construct support ratios, we use National Transfer Accounts (NTA) estimates of per capita labor income and consumption by age, as well as population estimates and projections provided by the UN Population Division for 16 African countries. First, we find that, on average, support ratios are rising in Africa. But compared with the support ratios in Asia and Latin America, the magnitude of those in Africa is lower because the percentage of effective workers in the total population is also low. Second, we find that human capital spending is high in countries with low fertility rates, which suggests a quantity–quality trade-off. NTA estimates also show that to capitalize on the demographic dividend, countries have to create economic opportunities for young adults. In addition, investment in human and physical capital is important to generate the second demographic dividend.

Muriithi, M., Mutegi, R., and Mwabu, G. 2017 “Counting unpaid work in Kenya: Gender and age profiles of hours worked and imputed wage incomes.” The Journal of the Economics of Ageing, in press, pp :1-8.

The paper first presents profiles of unpaid work by age and gender before turning to profiles of their monetary values. We value unpaid work using a novel data set on hourly wages from the Kenya Gazette on salaries of workers covered by minimum wages mandated by the Government in 2015 (Republic of Kenya, 2015). We count unpaid work performed by men and women at home, on the farm, and within household enterprises. In particular, focus is on unpaid work that is also typically performed away from home, such as child care. We value unpaid work using the delegation or third party criterion (Reid, 1934; Donehower, 2014). We find that men work longer hours in household enterprises and earn more than women, but the reverse is true on the farm. The imputed wage incomes from unpaid work on the farm vary by gender and age over the life course, with men’s imputed wage-income profiles dominating women’s at older ages. General policy implications of the findings are briefly discussed.

Changes in age structure that results from demographic transition have economic consequences. This paper identifies the period of potential window of opportunity or demographic dividends created by Nigeria’s demographic transition. This is done by simulating the period of the demographic window of opportunity in Nigeria. In a simulation covering 1950 – 2050 our results reveal that Nigeria entered the window of opportunity in 2003 and will last beyond year 2050. The highest benefit will accrue in years 2032 and 2033 when the dividend can account for more than 10% of the growth of GDP per capita even if the current performance scenario continues to exist. However, the paper notes that the demographic dividend is not automatically realized and Nigeria needs to embark on strategies that will develop her human capital and position her towards not only capturing the first dividend but the second dividend as well. 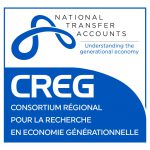